Click here to view the FORM - HORSE VET OUT

Stay up to date with all of the latest news with SZapp!

Half Yearly Meeting - Save the Date

The location is yet to be confirmed but will be released closer to the date along with the meeting agenda.

All members are welcome, we look forward to seeing you all again soon!

The committee were fortunate to run a very successful event in June after facing cancellation in 2020 due to the global pandemic. Once again, the overall event attracted over 500 high school students from right across NSW.

The polocrosse was once again very popular. Two divisions were organised. Division 1 is fundamentally for students who regularly play polocrosse, or who have had previous experience playing. This division was split into 2 grades and attracted a total of 14 sections. The competition was fierce throughout, with many students playing against their own usual club team mates, representing their particular schools. The “chukka style” polocrosse lead to some very close match ups through the competition. Congratulations to the section from Kinross Wolaroi (Jock Stuart, Zoe Stephenson and Ryan Weston), who eventually took out the highest honour in the A Grade – in what was a very close competition. Congratulations to the section from Calrossy Anglican School who were the runners up (Jack Hamilton, Danni Dwyer and Nicole Martin). Well done to the combination of Alice Murray, Molly Michelle- Smith (NEGS) and Phillipa Webb (Scots – All Saints College) for taking home the award for the B – Grade, with Molly Cullen, Pippa Cullen and Ella Hunt from Calrossy Anglican School runners up.

Congratulations to all the students who played in the Division 1 – once again the competition was very high, and could have gone any way, particularly in view of it being “chukka polocrosse”. Once again, all these players did themselves proud in the way they conducted themselves and the sportsmanship displayed in a great exhibition of polocrosse.

Division 2 of the polocrosse is always so exciting – especially for the kids, but also for the spectators. This year, 120 students presented to “give polocrosse a go”, with many returning from previous years, having spent some time honing their racquet skills. It is always such a pleasure watching them all have so much fun. This competition was held over the 2 days, and they all receive a few tips before going on the field, where the very patient umpires look after them. Many accomplished riders and their horses from other equine disciplines enjoy this competition.

The second division is run as a knock-out competition, and the eventual winners were from Calrossy Anglican School (Lara de Jong, Annabel Dalzell and Isabelle Burke). Other schools in the placings were Ascham, The Kings School and Gundagai High School.

There is always so much interest in the polocrosse at EXPO, and it was once again supported by Graeme and Jen Elford, who manned the NSW polocrosse tent, and assisted many with racquet repairs and advice on Saturday. Christie Hunt, NSW coaching director, also supported the event with running a raffle- style draw, spending a lot of time getting particulars of potential players. Thanks to NSW polocrosse and Christie for organising and supporting the “raffle” of the polocrosse racquet, which was won by Charlie Hall.

It’s always good to get so much support in the form of sponsorship, particularly in a small town. The local Carlos IGA was the major sponsor of the polocrosse discipline and NSW polocrosse sponsored the second division, which is so important, as that is where the sport might gain some more players from. As long time supporter, Laughlin Ross, says “there are so many riders, with horses and gear – most just need a racquet and some encouragement”  - and hopefully they might decide to play someday.

Such a successful event would not be possible without the support and help of a myriad of people – a lot of polocrosse community minded people who come to assist. A special thanks must always go the umpires, who sit on their horses for many hours at a time. A huge thankyou to “Ex Coona EXPO” riders who returned once again – Sam Hanlon, Sam Finlayson, Tim Finlayson and Jessie Ross – what a grand gesture to return and give back to not only the sport, but EXPO in general. Thanks also to other umpires – Gary Stevenson, Sandra Weston, Gareth Garnsey, Rebecca Cullen – many hours in the saddle looking patiently after a lot of kids.

Apart from parents of current riders, there are also a lot of “ex-parents”  and community members who just keep turning up to assist – thanks so much – Marg Garnsey, Darren Devenish, Chris Cormie, Jo Finlayson, Nick Knowles, Sal Deshon, Leanne Hall, Deb Stuart, Maxyne Prothero, Jamie Ross, Laughlin Ross, Christie Hunt, Ella Elks, Tanya Mulligan, and Doug Webb. A special thanks to Angus Stuart for taking on the role of Technical Delegate. Also, all those other supporters and parents who manned score tables, helped pilot the line marker and performed goal waving duties. 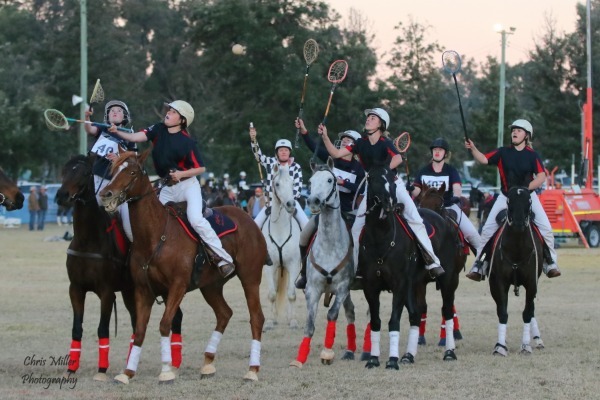 As the end of October approaches, although we are not playing polocrosse we have been busy on the income generation part of the year. 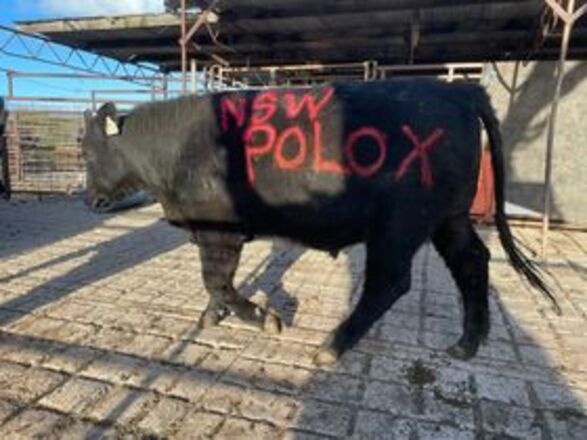 So far our own trading program has seen 6 steers owned by PANSW sell, making $1000/head (on average) profit! All proceeds of the sale of our cattle goes towards funding PANSW programs.
We thank Angus and Jamie Stuart for running this program for PANSW with special mention to Milling Stuart & Co.
Donations of agistment or livestock are sought from more members of the polocrosse community.  We have recently been offered a young horse to sell. Watch this space for more info on this generous offer in our next newsletter.
Please contact Angus Stuart on 0427 751 009 if you would like to discuss potential fundraising options or ideas.

April seems a distant memory now but lets throwback to the Sydney Royal Easter Show.
How wonderful was it to see our Subjuniors participate in the display match.
We thank our sponsors of this event Kelato @kelatoanimalhealth https://www.facebook.com/kelatoanimalhealth/
Did you know you can get a 10% discount on all Kelato products with the code PANSW - get shopping now!
Kelato Animal Health is an Australian owned company dedicated to producing and providing a range of horse health and nutrition products that help horses feel well so they perform well. As horse people themselves they are passionate about equine wellbeing and are proud of their quality products which are recognised the world over for their ability to maximise the condition of your horse, its diet, mane, coat, performance and overall health.
Kelato are as passionate about the health and well being of our equine partners as we are and stand by the benefits of their products. Like us Kelato believe that if a horse feels well, it will perform well!
#feelwellperformwell #swelldown #kelatoanimalhealth #kelato #gotokelato 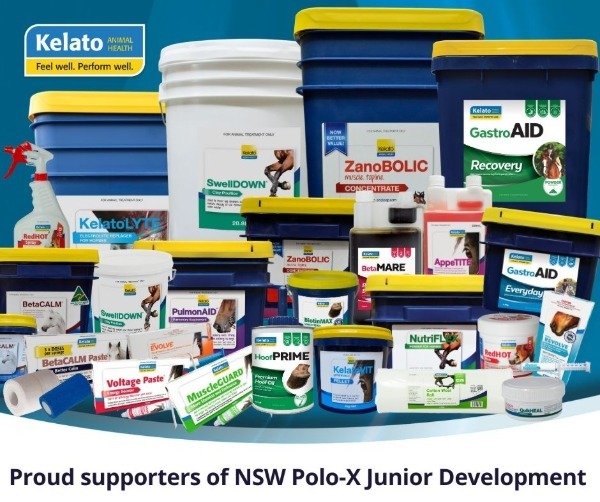 Soon you will see the teams for Ballarat Nationals released to the members.

PANSW would like to thank all of the selectors for their time and dedication to the selection process in trying circumstances.

Keep watching the website and socials for the announcement. 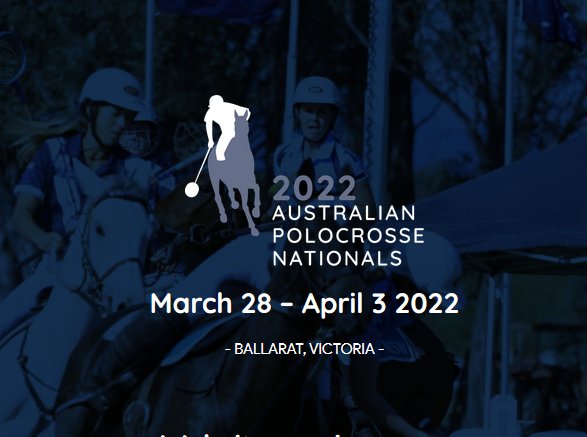 Looking to get work in the Horse Industry?

Arrowfield Stud, located at Scone in the NSW Hunter Valley, have positions available for workers to join their sale prep team immediately. 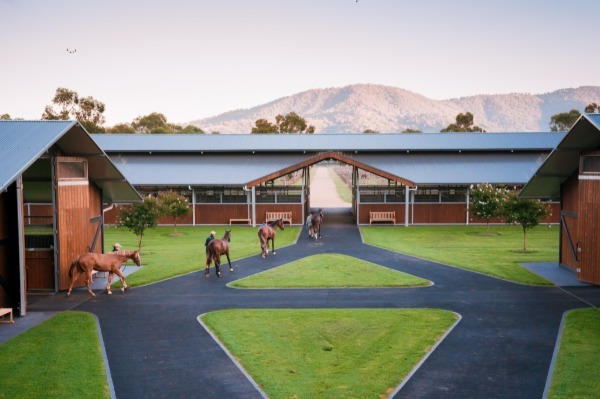 Come and join our team prepping sale topping group 1 winners like Profondo and Yearning at Arrowfield Stud. We have employment opportunities for people looking to broaden their horse knowledge or fill in their uni holidays to assist with our yearling preparation from late October 2021 onwards. Great accommodation and a fun team to work with. Please send an email to jess.hood@arrowfield.com.au

This message is to let you know that this year’s final Webinar for High Performing Officials will be held on November 17, 2021. This webinar will be conducted on the Webex platform.

Simon Taufel, international cricket umpire, will present on the topic of Success is never achieved on your own

Main elements of the session include:

Here is a brief clip that gives you some background on Simon.

The workshop will be held through the Webex platform on Wednesday, November 17, from 6pm – 7pm.  To register for the workshop please click on the link below. Once you have registered you will receive full details on how to log into the webinar a couple of days before the event.

The workshop is not being advertised to the public because I would like State Sporting Organisations to identify the officials they feel would most benefit from attending. Please forward this information to the officials in your sport who are in this category and would benefit from attending. And ask them to register by Friday November 12 so registration details can be collated and log in details sent out on Monday November 15

Did you know that PANSW Board member, Ben Sykes, is a world-leading authority on the topic?

Check out his Facebook page for some great videos on what causes ulcers and key aspects of treatment, including Ben’s own PhD work demonstrating why we need to fast horses overnight before giving oral omeprazole.

The FB page link is https://www.facebook.com/equineulcerresearch